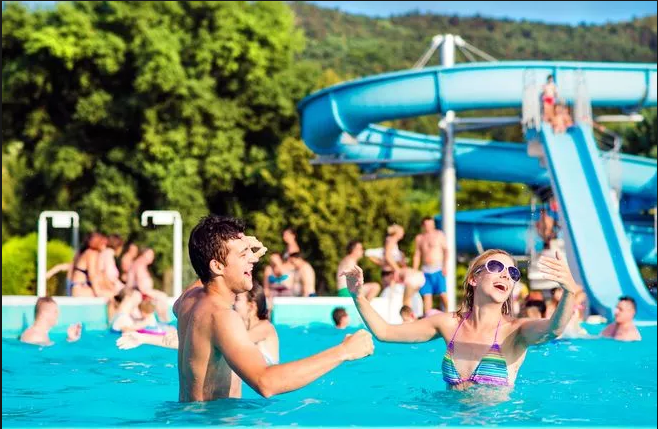 It looks like some serious swimming pool rules and regulations are needed at my condo community pool!

After hitting the pool this Memorial Day weekend, I’m convinced that my condo community needs some strict swimming pool rules and regulations. For four days, our lovely, vibrant pool turned into a complete zoo. Lawlessness and bedlam was the rule of the day, and honest, decent folk like myself and family struggled to find a small corner of the pool to enjoy. It was a challenge, to say the least. After these horrific experiences, It’s obvious to me that the current swimming pool rules at our condominium aren’t enough to keep the trash out. To help, I’ve come up with some better swimming pool rules:

Yeah, this makes me sound like a curmudgeon, but I don’t care. I wear sunglasses in the pool to protect my eyes from this but that doesn’t guarantee my safety. Hard splashing usually shoots water so deep into my ear that I have to use special droplets to remove it or risk developing swimmer’s ear. The feeling of water droplets slamming into my ear drum at high velocity is not a comfortable one, either. Every single time this has happens to me, it’s because someone was splashing me.

When children get into the pool, they lose both their intelligence and their manners. Must be something in the water, I guess. Such is the case with a certain type of child swimmer that I like to call the “pool stalker.” In short, these shadowing, splish-splashing simpletons make a habit of kicking, splashing, and swimming right next to your face. (See Rule No. 1.) If you move to the deep end, they follow you there and cavort around right next to you. Move to any of the three parts of the shallow end and they do the same. There’s no escaping them.

Pool Rule 3: No Jumping Contests in the Shallow End

What’s with groups of kids staking claim to an sections of the shallow end for non-sanctioned “jumping contests?” Over and over again, these boundless and bouncing buffoons swim to the ladder, get out, run back to the edge, and jump into the pool. First, it’s a regular jump, followed by a backwards jump, a sideways jump, a jump doing the splits, etc. In other words, it never ends.

This harebrained horseplay is a hassle for the following reasons:

There needs to be an immediate ban on jumping contests in the shallow end. File that under swimming pool games rules.

Dark-haired people are going to hate me for this but I don’t care. Some of you should be banned from the pool, namely the two dark-haired girls who were having a jumping contest in the shallow end. They made the shallow end look like the eel mating grounds in the Sargasso Sea. You have no idea how disgusting it is to dodge clumps of floating black hair as you paddle through the pool. No matter how good your defensive swimming skills are, you’ll still get these coarse, dark strands caught between your fingers.

There’s a reason why there’s a shower in the men’s and ladies’ rooms everyone must pass through on their way to the pool. These units are for people to shower off before they go into the pool. This helps wash away any loose hairs on a person’s head so these hairs don’t come off in the pool. Ponytails help prevent this as well. Careless mothers of dark-haired daughters take note!

What’s more American than tossing a football in the pool on Memorial Day weekend? Rhetorical question, because America has got nothing to do with this. In a crowded pool filled mostly with infants and young children, playing catch from one end of the pool to the other is a piss-poor idea. Nine times out of ten, the person who’s supposed to be catching the football misses. This usually results in someone getting hit in the head with the football, or it landing right in front of them and splashing them. (See pool rule No. 1.)

Hey Butterfingers! If you were destined for the NFL, it would’ve happened by now. The pool isn’t the place for you to play wide receiver. If you want to toss the football, get out of the pool and walk 20 feet into the park. There’s a huge lawn for you to pitch the pigskin to your peers. No more footballs in the pool. This is one of my swimming pool games rules.

Rule 6: No Jumping Contests in the Deep End

This one goes out to a couple groups of Millennials who dominated the deep end this Memorial Day weekend. What? Did you think this behavior was limited to children? Adult jumping contests involve two or more members of rowdy groups of half-intoxicated snowflakes. These football flinging fools put the “quarterback” in the pool. He throws the football as his friends make a mad dash toward the edge. Points are awarded for catching the ball and the uniqueness of one’s jump.

No. Just no. There are better swimming pool games for adults. The rambunctious behavior that comes along with it has no place in the pool. Take all the problems with the kids’ jumping contests and multiply it by 100+ pounds. These groups hog the deep end and make it dangerous for anyone to come near the rope. Plus, they’re loud, obnoxious, and most likely sneaking alcohol into the pool. Save that shit for the frat house, bruh. (Yet again, another one for swimming pool games rules.)

Rule 7: No Loitering on the Steps

There’s a group that we see at the pool every summer. It’s comprised of three females and three males. Each of them weights upwards of 300 pounds. Why is that an issue? Because whenever this “Beef Brigade blocks the stairs with its bountiful bulk, people can’t get in or out of the pool. At best, they’ll raise a sizeable ass cheek a mere inch to allow people to pass. They become indignant whenever they have to do this, too. Newsflash: The steps and the rails are for getting in and out of the pool only. Fan out, you freeloading fat asses… or face the consequences!

If you have so much body hair that we’re not sure that you’ve taken your shirt off, you shouldn’t be allowed in the pool. Shave that hair, my hirsute homie, or face violating my swimming pool contamination rules.

Who in the right mind brings a huge, inflatable peacock big enough to house a family of four to a small, condominium pool? As crazy as it sounds, it happened over the weekend. This immense, inflatable eyesore practically took up all the space in the shallow end. It pushed groups of kids and adults to the walls, leaving them no room to enjoy the pool. We fled to the deep end to avoid this floating monstrosity. Thank goodness the offenders didn’t stay long.

I don’t have any cute things to say about this one. I don’t want scumbags in the pool, period, point blank. In case you’re wondering, scumbags are people from neighboring apartment communities who sneak into our pool on hot summer days. These daring degenerates don’t pay the association fees needed to maintain the pool. Pretty soon, we have hordes of people crowded into our pool, eating potato chips, shouting, and destroying the general sanctity of our precious and once pristine pool.

My swimming pool compliance rules clearly state that freeloading moochers or lazy bums allowed. This is a private pool, not something conceived as a result of “democratic socialism.” In no uncertain terms, I say “No scumbags!” Consider this my swimming pool gate rules.