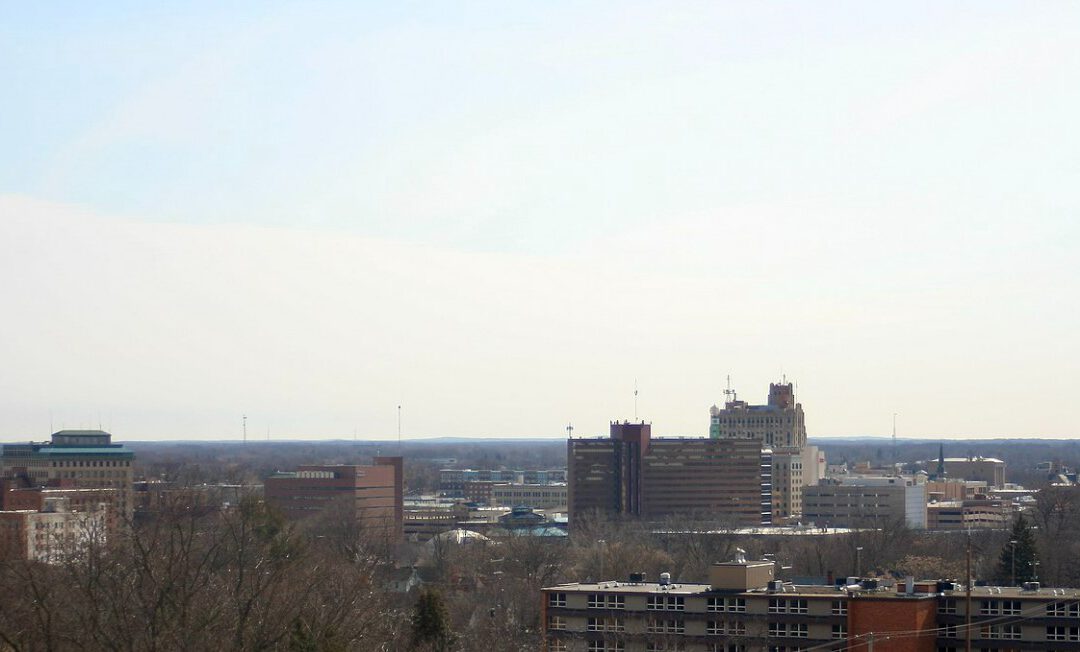 Love for my hometown’s punk rock scene brought me to downtown Flint on March 11, 2022. My visit was everything I wanted it to be.

I love coming home to Flint, especially when it’s music that brings me back. My visit on Friday, March 11, 2022, had to do with my book, “Wasted Youth: A Flint Punk Rock Memoir” and our band, Trauma Central. Being downtown gave me other opportunities to connect with my past and present. Join me as I retrace my steps on the bricks and beyond. 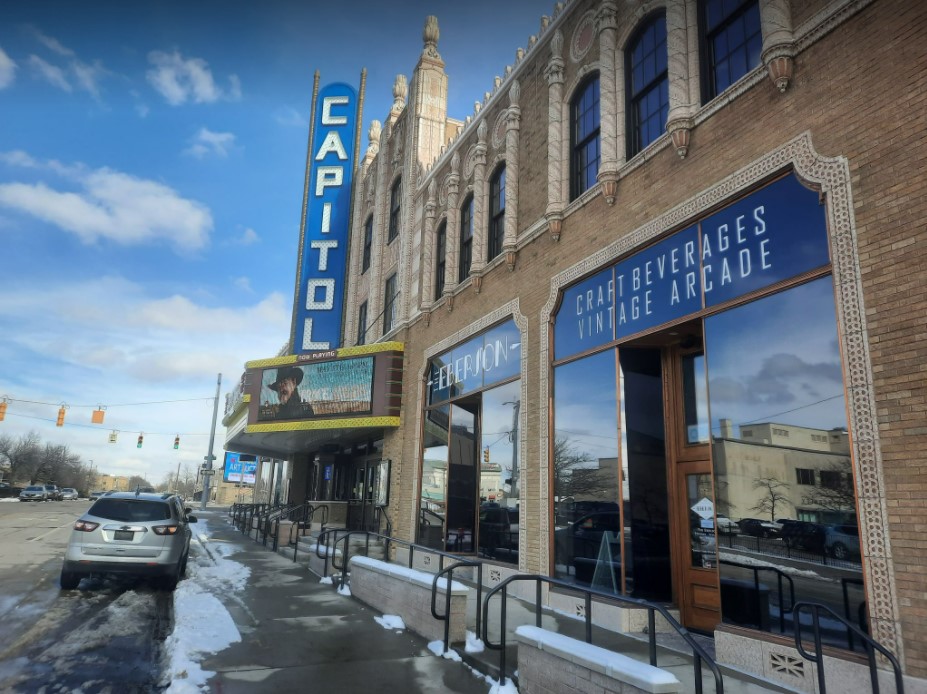 That’s the address of the Capitol Theatre, of course. That building haunts me like a ghost and I can’t resist its seductive call. I could stare for hours in wide-eyed wonderment at that majestic building. (It sure looks a lot better than it did during my punk rock days!) If you’ve read my book, you know why. If you haven’t, I’ll happily wax poetic about my favorite place in downtown Flint.

By the late 1980s, The Capitol Theatre was ground zero for the Flint punk rock scene. I saw my first show there sometime in September 1988. My band played its first gig there two months later. (An experience I’ll never forget!) I’ve seen too many shows and made too many memories there to count. That’s why it holds such a special place in my heart. 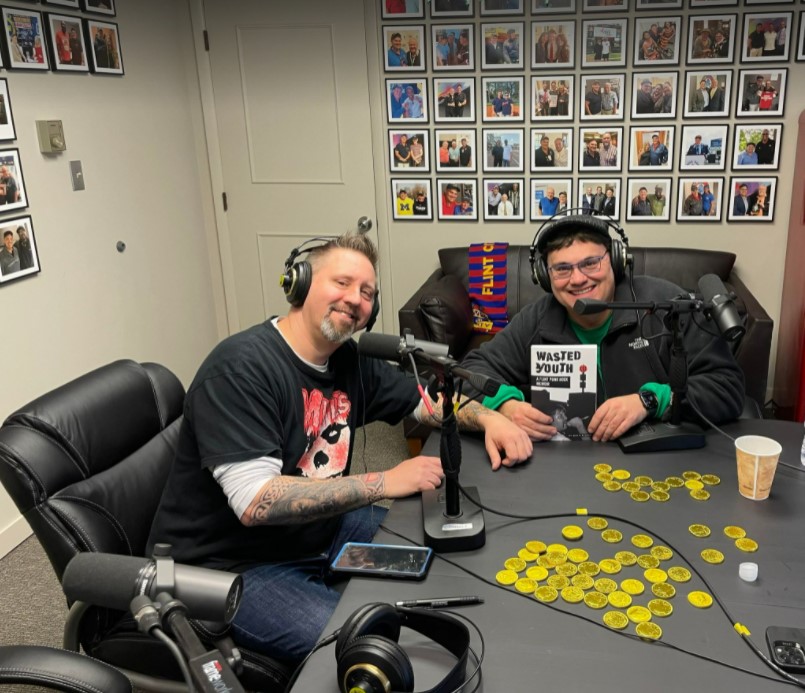 After taking a pic of The Capitol, it was on to The Mott Foundation Building. Flint radio host Gary “Fish” Fisher offered to interview me about my book. I’m glad I took him up on his offer. Fish told me he reads every book before featuring any author. The questions he asked me and comments he made about mine told me he read it cover to cover. More importantly, he gets it. I mean, he truly gets what Wasted Youth is all about.

I don’t want to give you any spoilers. All I’ll say is that doing that interview was an amazing experience. I literally connected with a perfect stranger who gave me keen insights into my life just from reading my book. You can check out the interview at 11 AM, on March 30th, on WFNT 1470. It also live streams at WFNT.com. Fish will upload the commercial-free version to the WFNT website within 30 days after airing.

If I’m Flint-proud enough to put the Weatherball on the cover of my book, I’m more than happy to wear it on a T-shirt. This was my first time inside Flint City T-shirts and I like what I saw. 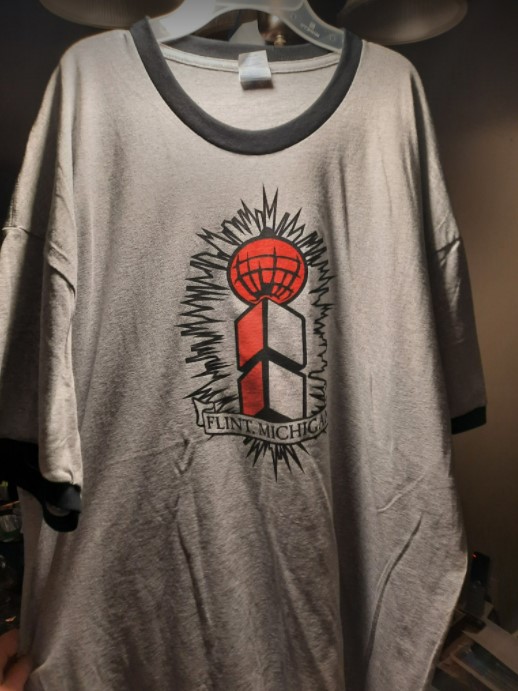 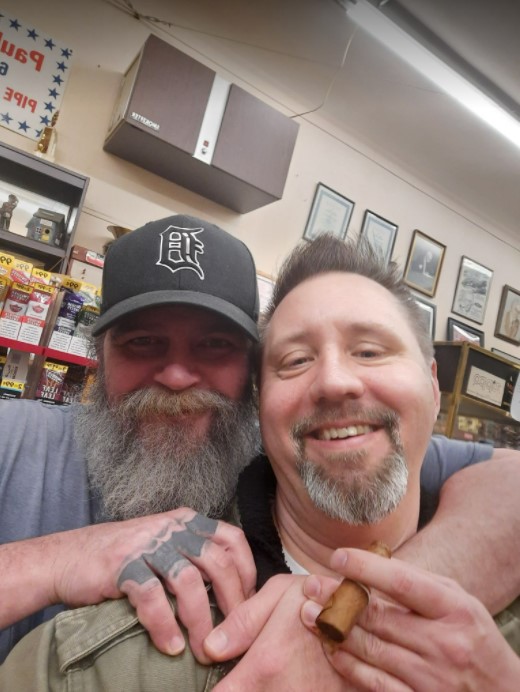 I had to stop by Paul’s Pipe Shop at 647 Saginaw Street. It’s about a block on the bricks from Gary’s studio. I’m a cigar aficionado but that’s not the real reason I went there. Paul’s grandson Carl Spaniola works at the iconic downtown business. My friendship with him stretches way back to 1990. We were like brothers back then. And like any older brother, I couldn’t resist busting his chops. Don’t worry, though. Carl gives as good as he gets and then some!

He’ll tease me about my choice of words here, but spending an hour with Carl was a heartfelt experience. We don’t see each other nearly as often as we should. You wouldn’t have known it if you were in the shop that day. We picked up right where we left off. Carl will always be one of my bros and I love him dearly. I’m also not afraid to say that.

Our love for Capitol punk shows brought Carl and me together. Needless to say, we couldn’t resist talking about the Flint music scene and his band, Super Horn Dog. Carl invited me to his bandmate’s house that night. The two were tracking bass guitar parts for their upcoming release. I really wanted to go but I had some recording of my own to do. 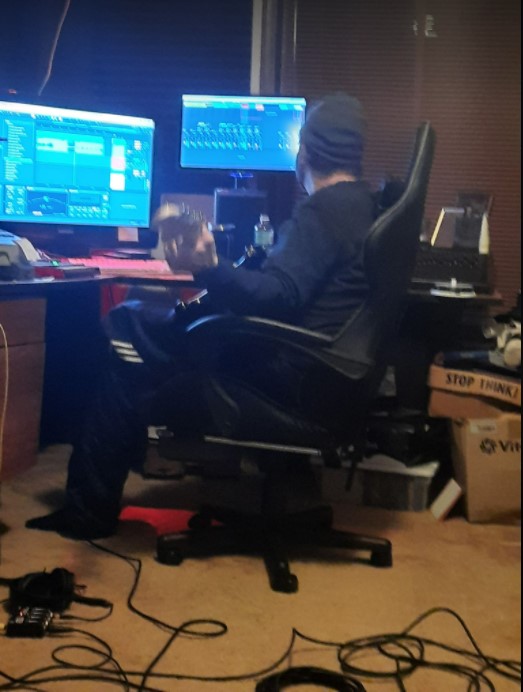 Yes, I’m talking about THAT Andy Harris! The one who’s prominently featured in the pages of my book. For those of you who haven’t read it, Andy is my longtime friend. He’s also my music producer, bandmate, and muse. Anything of significance that I’ve done in the world of local music I did under his expert guidance. When it comes to Andy, the Rick Astley Rule applies: Never gonna give him up. Just saying!

Whenever I’m in Flint, I try to book time in Andy’s studio, The Red Room. From that undisclosed location, we worked on our band’s upcoming release. (“Like a Beaten Dog,” page 95-96 in my book.) As usual, Andy was spot on with his guitar punch-ins but I struggled with the vocal track. Unlike my buddy Carl, I’ve been out of the music scene for over a decade. I’m sure I’ll pull it together on my next trip to The Red Room.

My Past and Flint’s Present Collide Downtown

That’s how it feels for me every time I go back. It is both the downtown I remember and something strange, new, and different. The revitalization has turned the area into a tourist attraction of sorts. It’s like a mini Greenwich Village. Meanwhile, my memories of downtown as my personal punk rock province flickers through like a restless ghost. Sure the place has changed, but I haven’t exactly stayed the same. I guess we’re in this thing together, Flint!