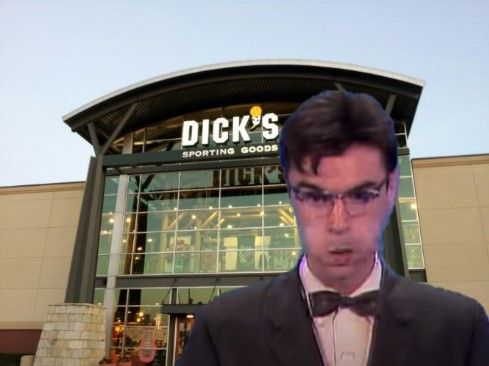 Fuck Talking Heads! They’re nothing but a bunch of greedy money whores who are shamelessly grasping at every penny they can get from their shitty, outdated songs.

Okay. I might need to walk that statement back because I actually like Talking Heads. Also, if Fido Kennington reads this, he’ll respond with one of his classic outbursts in my comments section. He goes hard in the paint for the bands he likes, and it wouldn’t surprise me if Talking Heads is one of them. Let’s just say that I was a little surprised to hear this song blasting into the parking lot of Novi, Michigan’s West Oaks shopping center. The song once described as a “satire on capitalism, complacency and greed” was front and center at a place that’s a monument to those traits. My first impulse was to wonder if Talking Heads would want their music to be played in such an obviously commercial setting?

This gave birth to a second thought, which was, “Who am I to assume what Talking Heads want or don’t want with their music?”

It’s always a good idea to question our own assumptions. The more I thought about it, the more I began to put the whole thing into its (presumably) proper context. Byrne would have been 29 years old when “Once in a Lifetime” was released. The rest of the band was within that same age bracket at that time. Like most 20-somethings in America’s nascent punk rock movement, they probably had a certain anti-commercial sentiment, at least to SOME degree. How much of that was real and how much was posturing might be a matter of debate, but the band’s Leftist leaning always seemed legit from my vantage point in the cheap seats.

What people think when they’re in the 20s – often described as “the most idealistic time of a person’s life” – might not accurately reflect how they feel today. As I write this, Talking Heads enigmatic frontman has reached the ripe old age of 69. He’s not exactly living life during wartime these days but his art is still burning down the house, at least as far as his edgy 2020 HBO special “American Utopia” is concerned. Here’s the trailer.

When Talking Heads recorded “Once in a Lifetime” in 1981, they probably never imagined a world the likes of which we have today. Even so, the band recorded the song and album (“Remain in Light”) on Sire Records, which is owned by Warner Music Group and distributed by Warner Records. Right from the start, the band was courting mainstream success while recording their covertly subversive, anti-commercial, anti-mainstream music. Before you think that’s an oxymoron, keep in mind that I firmly believe a person can hold two opposing thoughts inside their mind.

If I haven’t already said enough about Talking Heads, here’s something else to consider. Bands who record on major labels and their subsidiaries usually retain the right to allow and refuse the use of their songs for specific commercial purposes. Chances are, Talking Heads were asked if “Once in a Lifetime” and other songs could be played at Dick’s Sporting Goods and they agreed. Then again, my friend Stuart Sweet brought something to my attention:

“In general the artists are not involved in this sort of routine licensing. This is a public performance license, which does not imply endorsement. In most cases, this sort of thing happens automatically unless the publisher specifically does not want ASCAP to handle licensing. So, no one asked David Byrne if dicks could use the song, it’s probably part of a music service that pays ascap fees, and Byrne gets maybe a nickel out of the deal.”

Whatever the case, Talking Heads deserve any royalty payments they can get as far as I’m concerned. Their (possible) decision to allow Dick’s to play the song also makes sense. Consider Ed Stack’s (Dick’s CEO) decision to destroy $5 million worth of its AR-15 rifles in stock. I’d venture to guess that Talking Heads would support such performative acts of woke corporatism.

On a personal note, I was kidding about the whole Talking-Heads-are-sell-outs-thing. I believe artists are entitled to make as much money off their work as they can. Yes, that even goes for bands with an “anti-commercialism” message. (Wouldn’t it be hilarious if Steve Ignorant of Crass became a millionaire off royalty payments for “Do They Owe Us a Living?”) The whole concept of “selling out” is a bullshit phrase that aging local musicians like to say. It’s code for, “It sounds better to say, “I have too much integrity to sell out” sounds a lot better than, “I squandered my talent and opportunity on drinking, dope, and dumb decisions.”

And you may ask yourself, “Why does J.P. think so much about things like this?”

I say you can never think enough.