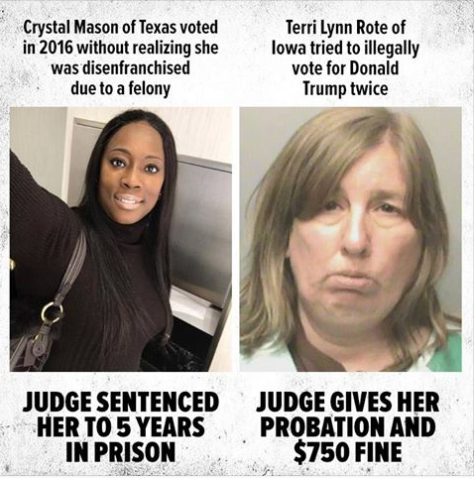 So, does this disparity in convictions prove that America’s justice system is racist? If we take this meme at face value, it would appear that it proves what Leftists, progressives, and social justice warriors have been saying – America’s justice system is racist. I found this meme on Facebook. It was shared by one of my more progressive/SJW Facebook friends. In his opinion, this disparity in sentencing is proof of something. Truth be told, did not say what he believes this to be proof of. Knowing him like I do, I believe I know what he was hinting at with his Facebook post. I strongly believe that my friend thinks that the disparity in sentences between these two woman shoes that America’s judicial system in inherently racist and guided by systemic white supremacy.

According to the meme, Terri Lynn Rote of Iowa tried to vote for Donald Trump twice in the 2016 election. This is illegal. Instead of the five-year sentence that Crystal Mason received, a judge in Iowa ordered Ms. Rote to be on probation and pay a $750 fine. At face value, the meme seems to imply that Ms. Rote got a much lighter sentence than Ms. Mason for a similar crime.

Admittedly, I tend to get pissed off when I see memes such as this one shared on Facebook. These memes are hardly ever 100 percent accurate in their depiction of events, yet they tend to be wildly popular. Here’s why: The information presented in them almost always appeals to the confirmation bias of the person who shares the meme. In case you’ve forgotten what confirmation bias is, here’s a refresher:

In layman’s terms, if you already believe that our country’s justice system is inherently racist, then this meme will confirm what you already believe. You’ll have no need to research the situation any further; instead, you’ll click “share” and slap some type of angry, virtue signaling rant with it. Your post will no doubt get likes and shares from people who share this bias about America’s legal system. Unfortunately, this is both ignorant and intellectually lazy.

The biggest reason why this meme is bullshit is because it offers a classic apples to oranges comparison. Despite how much Ms. Mason and Ms. Rote’s crimes appear to be the same, they are not. Facebook has no shortage of these “apples to oranges” comparisons and all the socio-political ramifications that this implies. While few people take the time to research the facts before they click “share,” I’m happy to break this meme down for you.

Here are eight reasons why the Crystal Mason/Terri Lynn Rote meme is bullshit:

So, is our justice system inherently racist?  If it is, this meme doesn’t prove it. Social media memes are bad because the content in them is often deliberately deceptive. These things are designed by clever people who know how to play to people’s emotions and cognitive biases, particularly confirmation bias. Despite glaring inaccuracies, fast and loose “facts,” and a rather obvious agenda, people believe these memes. They share them as “proof” the righteousness of their causes. If you’ve gotten this far, I hope that this blog post will at least convince you to look into these things a bit deeper. Do your research. If the meme holds up to the rigors of fact, then by all means share it. If it doesn’t, then I wouldn’t recommend sharing it. You wouldn’t want someone like me saying that you’ve been played for a fool, would you?