Do you have a friend who’s “Facebook fragile?” You know the type. They post grandiose yet inaccurate socio-political statements on their Facebook page, then come unglued if you dare challenge them on it. They can’t handle being confronted with facts, statistics, and/or an opinion that’s different from their own. This usually results in angry exchanges that end in me getting blocked. I know a few people who are Facebook fragile. This occasional series examines my interactions with them. Here’s one of those, which started with this post… 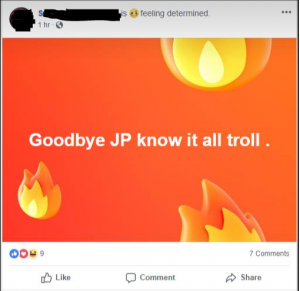 I guess I should feel honored that “S” went to the trouble of making a color tile post announcing his displeasure with me. I know why he did this, too. In another post on his page, he shared a story about men getting angry after being shot down on dating apps. The article and S claimed that the men’s reactions are proof positive of an evil patriarchy that must be rooted out and severed from our society. (“Think of all the women” and all that.) I responded with a YouTube video showing a compilation of ex-girlfriends acting poorly. It was your usual assortment of stalking, banging on doors and windows, physical attacks, etc. S attacked me, claiming that I’m ignoring the “fact” that women’s lives are at risk from men Every. Single. Day. In. America. I offered this simple response:

“What I’m suggesting is that there are many people regardless of gender who have not developed the social skills they need to process the feelings associated with rejection.”

S said that he actually agreed with that statement. I liked his response and considered the matter between us concluded. A few hours later, I saw his color tile post proclaiming my trolldom. I had a feeling it had to do with my earlier comments so I revisited the post. Sure enough, one of his female friends (who doesn’t know me) left a hate-filled response about my alleged ignorance and misogyny. It wasn’t hard to figure out what happened. S had to denounce me in order to save face with his feminist friend, hence the color tile post.

My response to him was simple and to the point. Little did I know that this would #trigger one of his friends.

Okay, so I know “D,” and to say he and I don’t get along is an understatement. He’s playing the maturity angle here yet he’s one to talk. I wish I would have saved the hate mail he sent me back when I used to know him. I can’t get into too many details, but let’s just say that he emailed me some very nasty insults as well as a crude photo of bodily functions that summed up his feelings about me as a person. And, for the record, saying “say it to my face” is nothing like saying “my dad can beat up your dad.” Add that to the ever-growing list of things that D and I don’t agree upon.

So, the two of us had a rather fruitless discussion in which D clearly tries to goad me into making some type of threat. I didn’t take the bait… 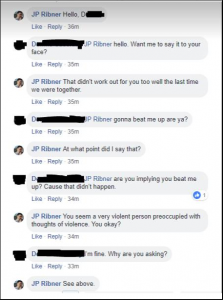 At this point, D did enough barking to bring in “C,” yet another member of S’s little pack. This lovely discussion ensued as a result: 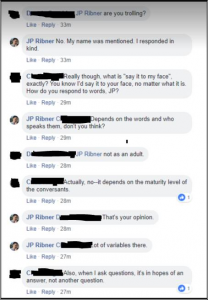 You have to admit C’s tenacity if nothing else. D, on the other hand, does exactly what he says he wasn’t going to stay around for – a pissing contest. As a matter of fact, he started the pissing contest. See for yourself… 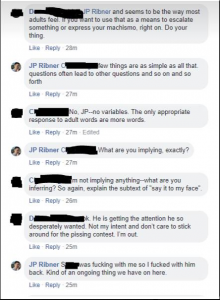 With D retired, C tries his hand at being a district attorney. (It might be the only job he’s ever had.) Check it out…

I’ll bet you’re wondering if C and I resolved the issue through private messaging. We didn’t. Like the rest of this unruly mob, he wasn’t seeking to find some middle. He made it clear that he was only in the discussion to get the answers he demanded and to make his point. He wasn’t interested in anything I had to say and i knew it. As a result, it ended pretty much where it begin, with me feeling some kind of way, and him another. Oh well. He and I were never friends anyway, merely the briefest of acquaintances.

… For those of you who live by the numbers, here’s how S, D, and C rate in my totally unscientific, non-double-blind Facebook Fragile rating system. Each one of the receives one point for each (totally subjective according to me) infraction they commit. Here’s how each of these gentlemen, and I use the term loosely, scored:

S received a grand total of three (3) points for the following infractions:

D received a grand total of five (5) points for the following:

Collectively, these three gentlemen have a Facebook Fragile rating of FOUR. They should appreciate that, since they’re all part of a collective of sorts, anyway.

Look, I’d like to say that I’ll behave myself on Facebook, but anyone who knows me knows that I can’t resist. I always want to swing a stick at every Facebook post pinata that’s filled with misleading political posts and virtue signalling that. I take a special delight in seeing all the emotions come pouring out of the hole I made in their frail, paper mache egos. See you soon!