This installment of Facebook Fragile highlights a certain type of Facebook user that I detest. As you might have guessed from the title, I called this type the “terrified turd tosser,” and you’ll see why as you read our exchanges. Here’s the setup: I’m arguing politics (What else is new?) with “Big Grig,” whom I’ve known since junior high. Big Grig and I normally play rough with each other with no hard feelings afterward. It’s not uncommon for us to resort to insults and questioning each other’s intelligence quotient.

Big Grig and I were in a back and forth on a mutual Facebook friend’s page… then Tommy shows up and decides to insidiously interject himself into the interaction: 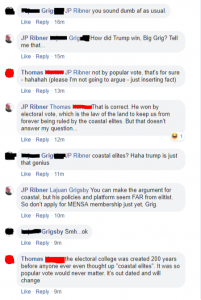 So, not only does Tommy come in to “school” me about the electoral college, he also hints that the Democrats will do away with it when they regain power (he hopes) in all legislative branches. Never one to back down from a challenge, even if it’s from a stranger, I decided to retaliate: 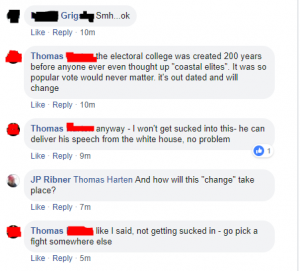 Does anyone else see what he did right there? If you don’t, I’m happy to explain because this is why I call Tommy the “terrified turd tosser.” It should be quite clear to anyone reading this that Tommy chose to interject himself into a debate between me and Big Grig. He made sure to get his digs in; but, when I questioned him about what he said, he had the nerve to tell me to “go pick a fight somewhere else.” It was as if he said that I started the whole thing, not him. I’ve encountered this type before on Facebook and I have no respect nor patience for their type. I decided to call him out on it and in doing so, refer to him as “Tommy:”

It becomes transparent that I touched a tender topic that made Tommy tearful:

To which I rebuked with this resounding and remarkable reply: 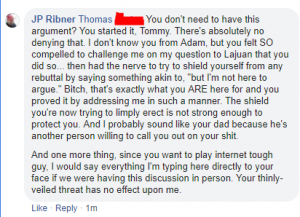 When confronted with my creative courage, the contemptible, craven coward complies in complete capitulation:

That’s right, ol’ Tommy gets a 8 for his foolish flourish of Facebook fragility. I awarded him one point for each foul committed. And yes, this is a completely subjective rating that cannot be measured by any real mathematical formula. (I always hated math class, anyway.) So, without any further ado, here is how I distributed Tommy’s points:

I just hope Tommy learned something from this exchange. I hoped I was able to help him realize that you can’t smear people with your shit then spare yourself a retaliation simply by saying, “I’m not here to fight.” Actions speak louder than words, and the people who Tommy attacks won’t be stupid enough to believe he’s trying to avoid a fight… especially if they’re standing there covered in his metaphorical Facebook feces. Should I ever encounter him again and he hasn’t learned this lesson, I’ll be sure to bitch slap him like I was his daddy and he took the last piece of chicken at dinnertime. Big league.

I’d like to say that I hope to bring you more installments of Facebook Fragile, but I think we all know that this could be a neverending well of fun and surprises for me. These things practically write themselves. All I really have to do is share a political opinion on Facebook. The trolls will literally crawl out of the woodwork to get me. My only concern is Zuckerberg banning me, which he and his crew like to do whenever someone says something that goes against the globalist agenda. Knock on wood, I haven’t been banned as of yet. Let’s just hope my luck holds out. Hopefully, I’ll see you all next week!