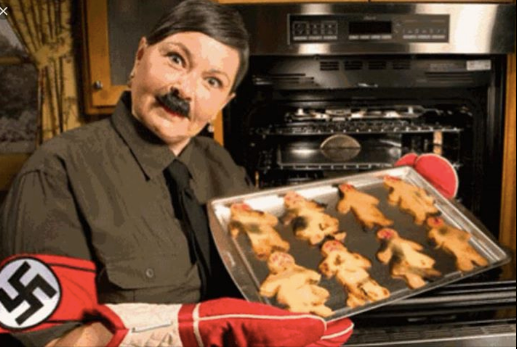 I’m on meme patrol again, this time disproving the erroneous theory that President Trump and Roseanne Barr are anti-semites. This time, the offending meme comes from none other than Occupy Democrats, themselves. As you can see above, the meme features actress Roseanne Barr dressed as Hitler, complete with a swastika armband. To make matters worse, Ms. Barr is seen baking and burning cookies, which the meme’s creators liken to Holocaust victims. Look, I don’t make this shit up, but I do comment on it when I see people misrepresenting facts to fit an agenda. Such is the case with this bullshit social media meme.

The Problem With Political Memes

If you’re new to my blog, then I’ll take a moment to explain my position on political memes. It’s not that I don’t like them, per se. What I loath are memes that have a false premise being shared as “proof” of someone’s political position on current issues. I’ve been seeing this from many of my leftist, progressive, and social justice warrior friends on Facebook. The makers of these left-leaning memes deliberately misrepresent fact to manipulate people who already believe in certain wrong-headed notions. In this case, the meme’s creator believes that these pics of Roseanne somehow prove that Trump is an anti-semite.

Here’s a quote from Occupy Democrats that ran with this meme:

There’s more than a little bit of mental manipulation going on with these three sentences. Before I deconstruct it, however, let’s take a look at how this meme affected one of my friends on Facebook. Judging by his overly-emotional reaction, it’s obvious that this meme had its intended effect upon him. But don’t take my word for it. Here’s what he had to say about this political meme:

Wow! My buddy got a little worked up there, didn’t he? Upon reading this meme, his emotions caused high levels of adrenaline and cortisol to flood into his brain, causing frontal lobe shutdown. At that point, his ability for reasoning was severely impaired. Sadly, this has been hard-wired into his brain through years of liberal programming and conditioning. It’s sad when you think about it. He became so emotional that he didn’t take a moment to research the meme’s claims. Within five minutes of research, I was able to debunk this meme and my friend’s (and Occupy Democrats’) position.

Here are 10 reasons why this meme does NOT “prove” that Donald J. Trump is a racist/anti-semite:

Bottom line: Occupy Democrats dug these eight-year-old pictures up and weaponized them in their ongoing war against Donald Trump. And despite the meme’s deliberate lies and outright falsehoods, most left-leaning people who see this will believe it. This will be one of many “smoking guns” that supposedly “proves” Trump’s complicity in whatever made up crime they’re accusing him of this week. Considering how deliberately misleading this meme is – and how easily I was able to debunk it – I have but one question for my left-leaning friends: Are you tired of being taken for a fool by your rather dishonest political party?