That’s what someone asked me, and here’s my short answer: You don’t because you can’t.

Okay, I don’t know you so there’s no way I can tell if a hit has been put out on you or not. For the sake of this answer – and educational purposes alone – let us assume that someone has. Some powerful shotcaller has put a hit out on you. The why doesn’t matter because, as I said above, I don’t know you so I would have no idea why someone would target you in this manner.

So, if a powerful, influential person put a hit out on you, you’re probably not around to read my answer. Assuming you’re an ordinary civilian, you’re probably a goner by now. Even highly-protected mafia members and heavily-guarded military personnel have been the victims of hits. (Think Qassim Suleimani.)

If you’re still reading this, then the presumed person who put a hit out on you is not such a high-level criminal mastermind. That doesn’t mean that he or she (or zur, zim, their, etc.) isn’t just as dangerous. It just means that they don’t have the same level of access and resources as the top-level crims do.

Okay, so this person has ordered a hit on you. This means more than one person knows that this person wants you dead. Let’s say, just for the sake of discussion, that a grand total of five people know about the hit. Let’s also assume that you know these people and suspect that they might know who put out a hit on you and why. Can you ask them to share the details? Sure. Will they tell you anything? Absolutely not. Here’s why:

The people who know about the hit are TERRIFIED of the shotcaller but they’re not afraid of YOU.

Read that again and let it sink in. These five accomplices couldn’t warn you about the hit even if they wanted to. That’s because their boss – someone who’s powerful enough to order a hit – would have THEM killed. They know you’re not capable of harming them. They also know that telling you could very well expose them to the very fate I described above. I mean, you already shared your suspicions with the very people who are in on the hit, so to speak. (Not too mention the obvious – that if you go to the hit man to ask about the hit, you’re very likely to get hit right then and there!)

Now, I know what you’re thinking. How does John P. Ribner think he can answer this question? He’s just some copywriter nerd. What does he know about assassinations? To this, I say never assume that the mild-manner writer doesn’t have SOME working knowledge about what goes down in these streets. Check out this experience I had in 1988: 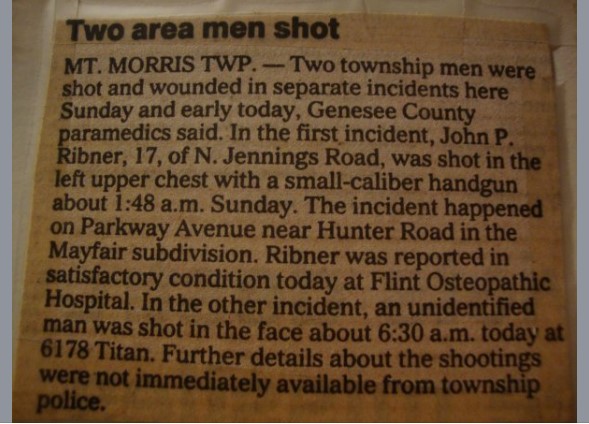 This happened three blocks from my home. THREE BLOCKS! No, it wasn’t a pre-planned “hit,” but I do think the shooter had a reason to be in my neighborhood. I suspect that he was there to visit and/or do business with someone in my neighborhood… someone I probably grew up with. And if this is true, that person KNOWS exactly who shot me. Getting the truth out of that person would be practically impossible. Why?

Because that person fears the shooter FAR more than they fear me.

Want to Learn More About my Drive-By Shooting Experience?

It’s all in my memoir, “Wasted Youth: The Narcissism Recovery of a Punk Rock Kid from Flint.” I thought music was my escape but I was having problems wherever I went. I blamed everyone but myself. When that didn’t work, I lashed out at the people I cared about. Then one day, I got punched in the face by the ugly truth about myself. It knocked me out of my shortcomings and into self-discovery. It’s from this place that I share my cautionary tale. I hope it helps anyone suffering the scars of childhood trauma.