Warning! There’s a Super Horn Dog on the loose and its red rocket is popping up everywhere!

Don’t go calling the Humane Society of Genesee County just yet! Super Horn Dog (SHD) isn’t a dog, it’s actually one of the hottest bands in Flint, Michigan’s local music scene. From playing bars and clubs every weekend to recording new CDs and more, this power trio is always doing something. I had the distinct pleasure of working with two of its three members when they graciously helped me get my fledgling old-school punk band off the ground. This was in 2000, and I could tell they were going places. They proved me right by moving on to other, more successful projects, the latest of which is SHD. After some scratching behind the ears and few treats, I was able to convince them to grant me this interview. So, let’s jump in with both paws. 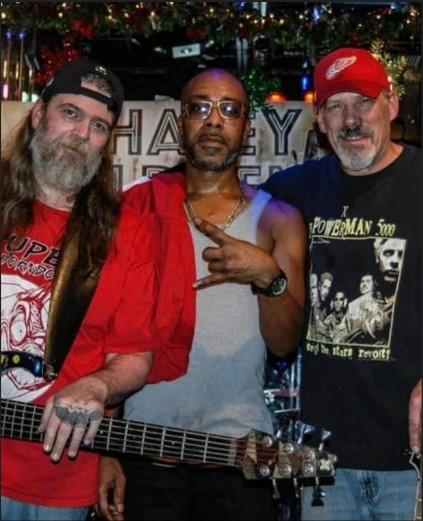 The personable yet somewhat annoying Carl Spaniola on bass guitar and vocals. He’s joined by the mysterious Mark “Hawk” Hawkins on guitar, vocals, and occasional banjo. Keeping the beat is Ant B. Foolin on drums and percussion. With this current lineup, SHD has released two CDs. You read that correctly, they actually went with old-school CDs, and I tip my hat to them for that. Those releases are “Red Rocket” and the band’s recently released “Boom Goes the Dynamite.”

With that out of the way, let’s get to know the dog a little better.

J.P.: Carl, during the 20+ years I’ve known you, you’ve always had a Rottweiler. Could your love of this breed factor into the band’s name?

Carl: “I’ve had multiple breeds of dogs in my years on this planet. Most have been Rotties. The band name actually came from an interweb search for an uncopyrighted band name. After pages upon pages, we came across “Super Horn Dog.” We all laughed and laughed and four years later, here we are… wherever that is.”

J.P.: Mark, the basis of any good band is a solid friendship, and you’ve known Carl for many years and played in many bands together. Tell us the story of how you two met and started jamming together.

Mark: “After playing guitar for a few years, a mutual friend of ours brought me over to Carl’s house where they were looking to form a band called Stoopid Poodles. I had brought my gear which was nothing more than a 20-watt little amp and a Strat knockoff and set up in the basement. We jammed for about 30 minutes and they said I was hired. Then they told me, “By the way, we have a show in 30 days.” Not only that, but I was the only one with a driver’s license and Carl would have his in 25 days. So yeah, it was a long time ago somewhere around 1992. Four projects later and 30 years later we hate each other more than ever.”

J.P.: Ant, you’re the only one in this band who I don’t know and I’d like to change that. Please share a little bit about yourself, what bands you’ve played in, and why you decided to jam with these two knuckleheads.

Ant: “It started in 1996 and when I first met Mark and Carl. We had a fucked up name for a band, Twenty After Four, that didn’t make it out of my living room jamming. After that, Mark and I hung out off and on throughout the years and had a few bands together while Carl was in Florida. (Pound Drive, Politikill). We reunited when Carl moved back and the rest is history. What can I say I love these bastards. I don’t want this dog to go away yet it’s a fun project.

“Before Super Horn Dog, I was in Mothra, Freewill, and Bonny & Collide, as well as Wizard’s Fool, The Round, Savoring Flavor, Mercy Beach, Jones’n, and World Class Band.”

J.P.: Carl, yours and Mark’s previous band, Jiggly Room, had you and Mark on bass and guitar, respectively. You also had a drummer, vocalist, and an oddly placed saxophone player. Why did you go with a stripped-down power trio for SHD?

Carl: “JigglyRoom was originally a five-piece:

“Super Horn Dog actually started with a fourth member, Greg Brown on vocals. He backed out with no hard feelings and we just decided to carry the load as opposed to auditioning vocalists.

“No offense J.P., my dear friend, but you would’ve never made the list if we had one. Diaper-wearing and flinging poop like a rabid monkey may have factored in the reasoning. Nonetheless we just decided to carry the load ourselves.”

J.P.: Quit nipping at my heels! Mark broke the bad news to me back in 2012. And speaking of Mark, I understand that the band records its CDs at your home studio, aka the “Hawk’s Nest.” How does being behind the controls compare to being behind the guitar?

Mark: “It’s a lot of work to self-produce your own record. Honestly, I’d rather just be playing guitar, which is still fun after all these years. The recording side is starting to be fun, there is just a lot to know and I’m still learning. The plus side is we have unlimited studio time so we can kind of work at our own pace and fine-tune the recordings to what we want them to sound like. It has been a lot of reading and picking each other’s brains to get this far. But mostly I just follow Carl, the real band leader, and his suggestions on the mix.

Carl: “I concur with Mark, the true band leader, on the recording process of recording our own material. It is a long and tedious process that inevitably makes you hate your own music.”

J.P.: Carl, Mark, and Ant, I know SHD has a new release called “Boom Goes the Dynamite.” What is your favorite song on this release and why?

Carl: “As far as my favorite song on the new album…. gotta be ‘I Ain’t Worth Fixin’ mainly because I’m not.”

Mark: “It’s hard to pick a favorite just because most of the songs have different qualities to them. I can narrow down to two… ‘Butterface’ and ‘Devil In Your Eye.’ ‘Butterface’ has a lot of vocals and a cool breakdown. Very dynamic. ‘Devil’ has us outside our box playing acoustics and there is a banjo and some slide guitar in there for highlights. That was the first song I ever put banjo on and struggle to still play that evil instrument.”

Ant: “All of the songs we do is my favorite. There is not an original song of ours no matter how complicated that I dislike. Until I have to play it and then I hate them all. LOL”

And hop on the Super Horn Dog bandwagon. Give their Facebook page a like and check out their songs on the Super Horn Dog YouTube channel. And if you’re looking for some live entertainment, THIS is the band to watch! SHD is ubiquitous, which means “present, appearing, or found everywhere,” in case you didn’t know. These guys are playing shows every weekend. (It seems that way to me as I like their gig posts on Facebook with no small amount of jealousy.)

Check out a Super Horn Dog gig. I promise no one will hump your leg. Well, Mark and Ant won’t… but I wouldn’t put anything past Carl!