The Viking Axe: Myth Versus Reality 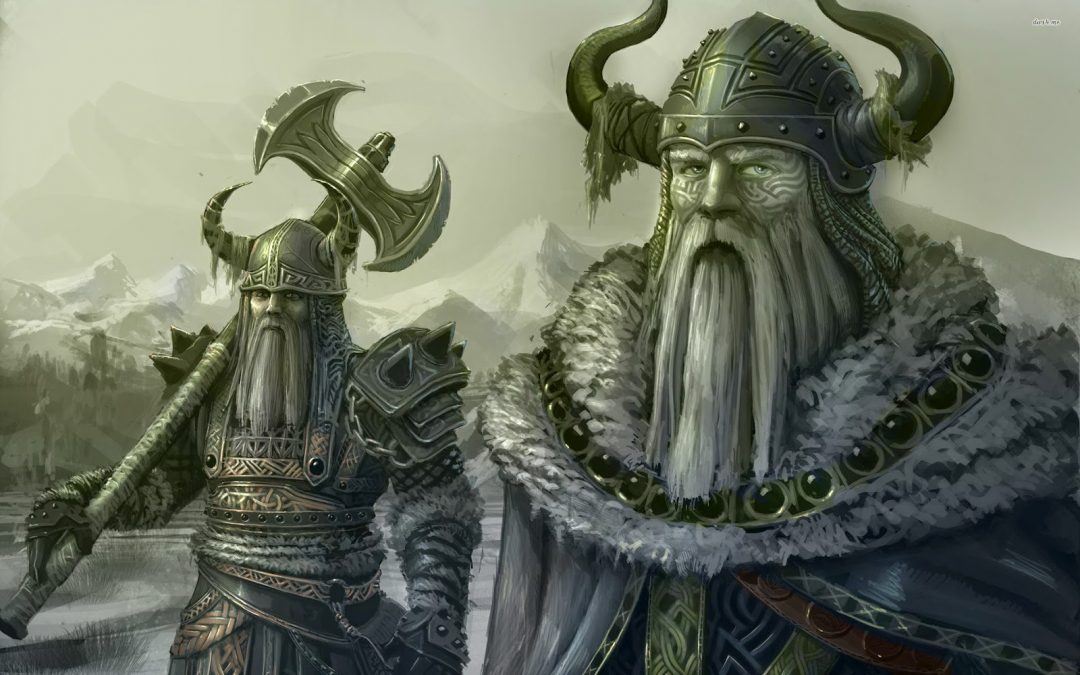 When it comes to Vikings, there are a lot of myths and misunderstandings about these ancient, seafaring Nords.  As a writer of Viking fantasy fiction, I often get questions based on these misconceptions.  Take the picture above.  I shared it because it perpetuates two common mistakes people make when they imagine Vikings. First, they did NOT have horns on their helmets.  (That’s a separate blog past for another time.)  The second misconception has to do with their weapons.  No, Vikings did NOT carry huge, double-headed axes into battle.  Still, I often get questions like the one below…

Q: What unique or unusual techniques did the Vikings have for fighting with the two handed broad axe?

A: The ancient Scandinavian peoples, aka the Norse, had three special techniques they used the broad axe for: ship building, splitting logs, and building homes.  None of these activities involved fighting… provided everyone was getting along that day.

The picture above is a broad axe.  It was a common tool among the Norse and other European peoples during the Middle Ages.  Due to its large, broad blade, it was a favorite among many ancient people’s for ship building, timber cutting, and other associated trades and crafts. Its broad, heavy blade made it well suited to the task of chopping, cutting, and even shaping wood.  These same characteristics made the broad axe a horrible choice for a weapon.  Simply put, its head was much to big and heavy to be effectively used in battle.  This would especially be true if someone needed two hands to wield it.

The Brutality of Medieval Combat

There’s something you need to know about fighting with swords, shields, axes, spears, etc. It’s not like you see in the movies. A real swordfight during the Medieval ages wasn’t a series of fancy strikes, blocks, parries, and other assorted swordplay. The typical battle engagement often had two people swinging at each other more or less at the same time. The winner was the one who either struck first, or managed to strike his opponent’s vital organ. Sometimes this would be enough to kill an opponent; but most of the time, it left warriors critical injured, bleeding, and dying slowly on the battlefield.  With the enemy quickly incapacitated, the victorious warrior could move on to his next combatant, etc.

Fights back then were fast and vicious.  A warrior had to be quick, accurate, and know where to strike in order to be victorious.  And he had to do this multiple times, since battles involved hundreds if not thousands of combatants.  So, knowing this, stamina also comes into play.  A broad axe would simply be two heavy and unruly to use effectively, fight after fight after fight.  The average warrior who tried to wield this weapon likely wouldn’t survive his first encounter, let alone several over the course of a chaotic battle.

Now that you have a better understanding of the vicous brutality of Medieval combat, let’s take a look at two-handed weapons. Generally speaking, these were considered a gamble on the part of the warrior. A two-handed weapon often gave more range and dealt greater damage, but it also meant sacrificing a hand that could be used to hold a shield to help protect oneself. In Las Vegas terms, a two-handed weapon is tantamount to putting ALL your money on one roll of the dice, or one pull of the slot machine.

Remember what I said above about the broad axe being too heavy and unbalanced as a combat weapon?  As a two-handed axe, it would be too big a gamble to use. Attacks from two handed weapons cannot be disguised or hidden behind a shield.  (You can’t even use a shield if both of your hands are holding your weapon!)  Given the nature of two handed weapons and the broad axe, a Viking couldn’t help but telegraph every attack.  An opponent would see the swing coming and counter attack quickly and easily. In most cases, an opponent could skewer his enemy mid-swing with his broadaxe. In other words, it’s all risks with no rewards.

If a broad axe were ever used to kill someone in battle, it likely would be a weapon of last resort from a frightened villager during a raid. If he/she were to get the kill, it would most likely be a “lucky shot.” Even then, I don’t like the broad axe-wielder’s chances when up against weapons designed for faster, more accurate attacks.

See the axe in the above pic?  It was called a “Dane axe,” and it’s a real Viking axe.  Notice the long length of its handle? This definitely makes it a two-handed weapon. Now, compare the size of the blade to that of the broadaxe. Much smaller, right? It’s smaller and, more importantly, lighter than the broad axe or those huge, double-headed fantasy axes that artists keep putting in Viking warriors’ hands. In the right hands, this light but deadly axe would make quick attacks at a distance, but still sharp and heavy enough to do damage.

If you’re in search for special Viking axe techniques, the Dane axe is your huckleberry. Since there aren’t many written records of Viking battle tactics, much of how these weapons were used is up to speculation.  Fortunately, swordfighting isn’t rocket science Some say the Dane axe was a favorite of Viking warriors who engaged in fierce, ship-to-ship battles. It’s been said that Viking warriors in two longboats would tie their craft together at sea to allow their occupants to do battle. The fighting was fierce, and the fear of damaging your ship or your enemy’s ship could doom everyone to a watery grave.

How did the Dane Axe come into play? Allegedly, those armed with these weapons would use the long handle to reach over their opponents’ shields. Once they did that, the “beard” of the axe was used to catch the top of the opponent’s shield and pull it down, or pull the warrior off balance. By exposing the enemy, other members of the Viking fighting unit would finish off the enemy whose shield was pulled.

Chopping attacks with the Dane Axe were believed to be done at an angle. Apparently, this made for easier recovery of the weapon for the user.  It also lessened the risk of breaking the axe’s long handle on an opponent’s shield, blade, or helmet.  Vikings wielding this axe might have also use the other end of the handle to bash opponents in the face, etc.  That would make for another unique or unusual technique, I suppose.

Given my kickboxing background, I know all about the damage that kicks to the leg can do.  My kickboxing brain sees this as a possible technique for the Dane axe – using it to chop at your opponent’s legs.  The length of the axe’s handle might let a warrior chop at oncoming legs at a fairly safe distance compared to shorter weapons. Truth be told, there were probably a variety of ways to use this weapon in battle.  Those techniques probably differed upon the skill and experience of the individual warrior using the axe.

Send Me Your Viking Questions…

Do you have a question about Vikings?  I’m happy to do my best to answer it.  Feel free to send your questions to me in the comments section of this post and I’ll answer it to the best of my ability and knowledge on the subject of these ancient Nordic warriors, traders, and seafarers.