Vengeance of the Virtue-Signalling Viking

Sometimes a “Facebook Fragile” incident is the result of an honest comment I make. Other times, I’m deliberately trolling and being an asshole. (At least I can admit it.) It was the latter in this latest case of Facebook fragility. As some of you know, I’m interested in Norse history and mythology from the Viking Age. I’ve written a three-book series of Viking fantasy fiction, after all. So, it should come as no surprise that I’m a member of a handful of Facebook forums dedicated to Viking history, the pre-Christian Nordic faith (heathenry), and related topics. These Viking-related groups were the last place I’d expect to see someone virtue signaling.

Since there’s always someone who doesn’t know what “virtue signaling” means, here’s the definition:

The action or practice of publicly expressing opinions or sentiments intended to demonstrate one’s good character or the moral correctness of one’s position on a particular issue.

So, the moderator of a heathenry Facebook page took the opportunity to virtue signal in his group. The gist of it is that he’s calling out people and aspects of the movement that he believes are racist. There was no context to his post other then him saying that a belief system, group, and individual in the heathen scene are racist. Here’s his post in all it’s glory; at the bottom is my reply. As always, click on the image to enlarge: 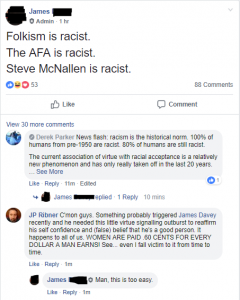 A post like this exposes James as a woke white person or WWP. Facebook is filled with these types and they’re all annoying. They proudly proclaim their wokeness on their own pages, groups, and even in comments on other people’s pages. And it’s always the same far left, social justice warrior drivel, too. You know, the kind of post that decries racism/sexism/homophobia/transphobia/Islamophobia and anything else that’s a phobia or an ism. These posts tend to get a lot of likes and validating comments from the poster’s like-minded friends.

I have a theory that if you scratch the surface of your average WWP, you’ll find an angry, selfish, and horrible person at the core. These folks have a long history of stabbing people in the back to get to where they are in life. They’re only subconsciously aware of how shitty a human being they are. This self-conscious low esteem drives their conscious need to proclaim their virtue to the world via Facebook. They’re trying to make up for the past sins even if they don’t know that’s what they’re doing.

The WWP thrives on the attention he/she gets from his woke posts. Every like, heart, and fawning comment creates an instantaneous and addictive dopamine rush. It’s the intellectual equivalent of grasping at low-hanging fruit. It’s also why they get so angry, aggressive, and nasty when anyone challenges them on Facebook.

Challenging a WWP is more than a buzzkill to them. Anyone who disagrees with them ends up shattering the WWP’s thinly-constructed delusion that they’re a good person. All that’s left is that subconscious self-loathing, which blasts to the surface like lava from a volcano. May the gods help anyone caught near that explosion! As proof of my point, James immediately blocked me for my comment rather than engage me on it. While it’s certainly his right – it’s his Facebook group after all – but I still think it’s a bitch move. (He also blocked someone named Derek who challenged him, and maybe a few others in that post.)

Why I Attacked this “Woke Viking”

I don’t have thoughts on folkism or the Asatru Folk Assembly (AFA). And as far as Steve McNallen goes, yeah, I get that he’s a controversial figure. He says he’s proud of being white, which is pretty much the worst thing any white person can say in today’s climate. The dialogue seems to be dominated by James and other WWPs these days, and they’re all too quick to broad brush the “racism” label. Whether McNallen is or isn’t is none of my concern since I have nothing to do with him.

So, if I don’t care about folkism, the AFA or McNallen, why did I take a swipe at James? Because it disgusts me to see the so-called woke people patting themselves on the back with these ridiculous posts. When they do that, I kick them in their asses… metaphorically speaking. I’ve dealt with these types of people since far left social justice sympathies spread through my local punk music scene in the early 1990s. The infected had little to no respect for other people’s boundaries back then, and it’s only gotten worse in post-Obama America. Consider me “triggered.”

Am I the only one who sees the irony in a highly-fragile woke dude moderating a Facebook group about Vikings? I mean, these seafaring warriors and traders were some of the courageous men in history. They braved the dangers of the stormy seas as well as huge and vast armies determined to kill them. During the Viking age, if a man insulted you, you challenged him to a duel and fought it out. If the Vikings were alive today, they would laugh at James’s heightened sensitivities and rather frail nature.

If you’ve read my Facebook Fragile series, you know that everyone featured in gets a Fragility Rating. I use a completely arbitrary system that awards one point for each perceived violation. The Virtue-Signalling Viking received a Fragility Rating of 5. Here’s how I distributed each point this punk-ass little bitch earned:

I’m Sure It Won’t Be Long

Given the amount of “wokeness” on Facebook these days, I’ll have another installment of this popular series. Trust me, it doesn’t take much to set these WWPs off. In most cases, it’s simply a matter of tapping the soapbox that they’re standing on at any given time. Other times, I don’t have to come looking for it. All I need to do is share my conservative/libertarian opinions on my or one of my friend’s pages and BLAM! Instant fight. Who knows where, how, and why the next showdown will take place?