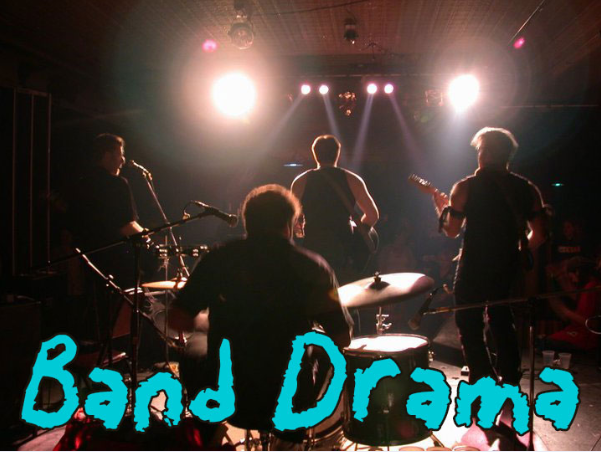 As a local musician, the only thing worse than dealing with other musicians is putting up with the wives and girlfriends. They tend to run the gamut from occasional nuisance to meddlesome harpy. They’re at their worst when their husband/boyfriend is in your band, of course, but they can lash at you years after the fact. Such was the case with the wife of someone who tried out for my band back in 2001 but didn’t make the cut. Eighteen years later, his beloved bride decided to take a swipe at me on a YouTube page that features one of my old songs.

You can hear the song and read my interactions with the guy’s wife here:

My Conversation with the Bassist’s Wife

First thing is first, I’m not going to make up quirky little nicknames for the people involved in this post. I do that for my Facebook Fragile series, but not here. Why not? Because Marie Miller used her name as her YouTube account and her comments to me are public. Because of that, I don’t really see the need to protect anyone’s anonymity here.

With that out of the way, let’s unpack a few things before we get into my conversation with Marie:

So, with all that in mind, I had a fairly cordial conversation with Marie, who responded to the music video on YouTube: 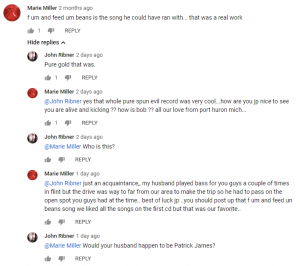 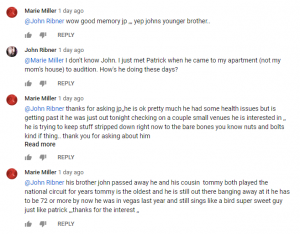 As you can see, Marie mentions that her favorite Pure Spun Evil song is “Fuck ‘Em and Feed ‘Em Beans, and sends best wishes from Port Huron. The only person I remember from Port Huron was a guy named Patrick James who auditioned for the position of bass guitar for our band. (Our original bassist had to take some time off for personal reasons.) All in all, it was a decent exchange between Marie and I. So you’re probably wondering…

In another comment, which she posted on the same day as her post about the song, Marie said:

Hmmmm… I wonder what she meant by that? I’ll have to give you some back story to put this little gem into context.

When I Was in a Punk Band…

… I was living in an apartment attached to my parent’s garage. It was quite literally a “mother-in-law apartment,” as in my grandmother used to live there before she passed away. It had its own kitchen, bedroom, bathroom, living room, etc. I moved into that apartment after a particularly nasty and costly divorced, and I’m forever grateful that my parents had the means and the desire to let me live there while I slowly put my life and my finances back together.

That apartment was ground zero for all of my music projects. It’s where me and the guys had band practices twice a week. (What can I say? We were dedicated to having a tight sound.) It’s also where we auditioned Marie’s husband, one Mr. Patrick James. It was a rather interesting experience to say the least.

A Little Bit About Marie’s Hubby…

Although we auditioned Patrick 18 years ago, I remember the experience like it was yesterday. I was in my 30s at the time this band was together and Patrick seemed a little older than that. Either that or the sex, drugs, and rock and roll lifestyle had taken its toll on him. As far as his bass playing was concerned, he was spot on. He took the time to learn our originals and did a solid job of playing along with the band.It was his personality that was the problem.

When it comes to auditioning possible band members, you get two types: those who come on too strong, and those who act like they could care less. Patrick was definitely in the first category. He was practically bursting with enthusiasm for the project and the possibility of being a member of the band. The problem was, he was so enthusiastic that he started telling us about his plans for the band:

Don’t Call Us, We’ll Call You…

After he left, me and the other two band members had a quick meeting to discuss Patrick’s fate with the project. We were in unanimous agreement that he didn’t have one. We were looking for someone to fill a bass guitar slot, not someone with 50% creative control of the project. Plus, Patrick lived in Port Huron, which about 75 miles away. That was quite a hike for practices and gigs.

As I said, we took a pass but I didn’t bother to tell Patrick. It was the whole don’t-call-us-we’ll-call-you thing. Unfortunately, a week later, Patrick sent me a strange, rambling email about how excited he was to be in the band and he was just waiting to hear from me, blah blah blah. IN the meantime, our original bassist was able to make it back to the band in time for an upcoming show in Mt. Pleasant. I broke the news to Patrick and that was the last I heard from him… except for a couple unsolicited emails promoting his then-new band, Spydervayne. (At least I think that was how he spelled it at the time.)

Given how the whole thing went down, I found it a little odd that Marie would say this regarding her husband’s all-too-brief flirtation with our band:

So, What Did She Really Mean?

Was Marie’s comment a harmless joke? Or did she take a shot at me because her husband can’t handle rejection even after all these years? I can’t be sure. If she was someone I knew, I would take her comment as humor and have a chuckle with her over the whole thing. Those who know me know that I don’t mind a joke at my expense. (Seriously. You should see the way some of my friends go in on me.) The problem with her comment is that I don’t know her, so it’s hard for me to understand exactly where she’s coming from. Also, her “mom’s house” post is at odds with her other comment above.

To me, it comes across as a case of sour grapes. Clearly there’s a discrepancy between how she remembers her hubby’s audition and what I recall. She says he “had to pass” on the bass guitar spot, but I recall that we passed on him. Why else would she feel so compelled to make that about me living in my mom’s house on a social media forum that the entire world can see?

Since I don’t know where’s she’s coming from on this one, I’ll let you be the judge. Feel free to leave your thoughts in the comments section below…