You know you’re doing something right when you get into a Facebook argument with Ana Kasparian’s brother. Yes, that Ana Kasparian, the annoying banshee who shrieks and pouts on that fake news show, The Young Turks aka TYT. Okay… if I have to be completely honest, the Facebook friend I tangled with isn’t technically Ana Kasparian’s brother, but he is a dude. He’s also old enough to be her brother. And, he might or might not be of Armenian descent, just like her. Most importantly, my friend has many of the same crackpot liberal ideals as Ms. Kasparian, and he’s constantly spewing out his bullshit on his Facebook page. Of all my Facebook friends’ politics, his are some of the worst!

Ana Kasparian’s Brother, whom I will refer to as AKB, and I have had many Facebook battles. The latest one, which led to me declaring him Facebook Fragile, took place on the page of a mutual friend. To cut to the chase, AKB and I were arguing about Trump’s wall versus the Affordable Care Act, (Obamacare), and which one is a better accounting of taxpayer dollars. As you can imagine, AKB is pro-Obamacare, anti-wall. I am the opposite. During the course of our back and forth, AKB posted something that really ground my gizzard. To wit: 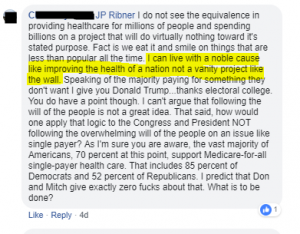 Admittedly, this really pissed me off because whenever the government forces the citizenry to do anything against our will, it can hardly be considered “noble.” People like AKB will continue to argue that it is because they choose to focus on the few people the ACA helped, people living in poverty, while ignoring the huge cost this imposed upon middle class taxpayers… many of whom made too much to be eligible for it, yet couldn’t really afford to pay the fine, either. AKB’s statement pissed off an another level, which is something that I call the “syllogism of the American Left.” It goes something like this:

Obamacare is righteous and noble.

I am righteous, and noble.

You can swap out Obamacare for any of the other grandiose Leftist policies, and it’s still the same thing. Calling something “noble” doesn’t make it noble, and supporting something you think is noble also doesn’t make one noble, or righteous, or a very good person, etc. Since the issues of border security and nationalized healthcare are intertwined, I decided to let loose on AKB. My response was so lengthy that I decided to copy the text straight into this blog rather than snip the actual conversation off Facebook and paste it in here. Your eyeballs will thank me later. Okay! Here we go:

“We were doing so well… SO well, you and I. And then you have to say something like this, which illustrates both the depth of your naivete and reaches of your hubris. Well, I’m about to do it, [AKB]. You know what that is. It’s your favorite thing. It’s where I dismantle your argument point by point on FB. I take a step further to show you how socialized healthcare and immigration go hand in hand. Ready for your favorite two words? To wit:

“Ever wonder why Norway, Germany, and many other Euro nations seem so desperate to bring in migrants, aka refugees, aka immigrants? Here a hint: it’s NOT because the governments of these countries give a shit about these people. They’re trying to ship them in en masse in a desperate gamble to sustain their crumbling welfare states. Stick with me [AKB], because it’s going to be a painfully bumpy road for you from here on in.

“Free healthcare and other stuff for all sounds GREAT… until it comes time to pay for it. That’s when reality sets in. Nothing is NEVER free. Shit costs money, whether it’s medicines, surgeries, or the qualified people to administer these commodities. The only way to get that kind of money is to tax people… and tax them heavily.

“In the 1970s, the hippy-dippy types pushed this thing called “zero population growth.” The buzzword of the day was that the earth’s resources were dwindling, so it was incumbent upon everyone in first-world countries to make a smaller carbon footprint by not having as many children. “Use birth control, save the planet.” Sounds good in theory, right? Unfortunately, in a welfare economy that’s solely dependent upon tax dollars, you eventually run into the problem of not enough “youngins” to enter the workforce to take care of the needs of the nation’s aging population

“Solution? Let’s import a bunch of workers from other countries and tax the shit out of them so we can sell a service to the people and get more votes!

“Norway was one of the first to try this post-World War II. Having lost a significant number of working-age men to the war, they desperately needed warm bodies to keep the machine running and the trains on time, so to speak. The Norwegian government imported a slew of “migrants” from the Middle East and things more or less worked out okay, although there was a share of culture clash between the “new Norwegians” and the native born. Same thing happened in post WWII England, which saw a huge influx of Pakistani and other migrants to work in London’s factories.

“Today’s social engineers look at these “successes” of the past in hopes of duplicating them. So, once again the buzzword is “open the floodgates” to people from countries with incompatible cultures in hopes to milk these folks for additional tax dollars. Someone’s gotta prop up those crumbling “democratic socialist” systems, after all. How do they get the native born to accept this? By selling it to them as a “noble cause,” the kind that you’re gushing about in your above post. I mean, who doesn’t want to pat themselves on the back and say “attaboy!” for “helping” impoverished people from other countries by giving them a “better life.”

“That sounds a lot better than calling it what it really is: indentured servitude.

“In many cases, some of these “foreign guests” end up becoming welfare recipients, which adds additional burdens onto already-stressed economic systems. (The whole point was to milk these folks of their hard-earned money, remember?) Those who do start business or get jobs send much of what isn’t taxed back to relatives in their home countries. (So much for putting it back into the local economy, eh?)

“So, we’re back to the problem of too many people yet not enough $$$ to pay for healthcare and other “human rights” that cost real money. Result: growing social unrest, the kind of which we see happening in places such as Norway, Sweden, France, Germany, and the UK. Immigrants are unhappy because the “promised land” didn’t live up to its promises. This has led to rioting in the streets, increases in rapes and violent crimes, no-go zones, and general lawlessness throughout the land.

“Immigrant crime and unrest fuels the flames of hatred among natives of these countries. Many people in the nations I’ve mentioned have been victims of violent crimes, usually at the hands of roving bands of immigrant gangs. (Evidence and coverage of this abounds… if you step outside your MSNBC bubble.) In many cases, native Germans, English, and other nations are turned away by their police forces, being told there’s “nothing we can do” about immigrant crime. (Again, plenty of info of this abounds outside your typical liberal news cycles.) Nothing pisses off the native population more than being told they’re not as important as the latest newcomers, hence a rise in “right wing extremism,” or so it’s painted by the media.

“In today’s day and age, nations can’t “immigrate” their way out of financial problems caused by bad economic policies. I furthermore, I don’t think national healthcare is worth the long-term troubles that come with importing people with incompatible cultures into this country in hopes that enough of them will become productive enough to be fleeced by our government. Believe it or not, that’s not fair to the migrants. Lastly, I definitely don’t think it’s wise to go down this road simply so people like you can look in the mirror and say, “See! I’m a very good person.” Flattering your ego simply isn’t worth this kind of trouble.”

AKB clapped back at me with this:

I was a little disappointed with this response. AKB is one of many Facebook friends who criticizes me because I go for the “cheap joke” instead of arguing the issues. I thought my somewhat lengthy response to him eschewed any comic buffoonery and roast and drilled down into this very complex and nuanced issue. And what do I get for all my hard work? AKB’s dismissal. But two could play at that game:

He came back with something equally smarmy, so I responded in kind:

My thought process here was pretty simple: if you don’t have time to read a somewhat lengthy post, then you shouldn’t dabble in Facebook politics. Needless to say, my observation wasn’t well received by “Mr. Kasparian:” 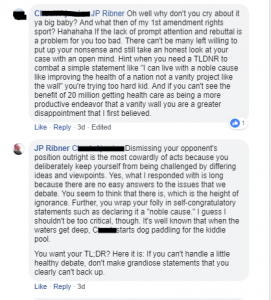 And we continue to shout into our respective echo chambers and it pretty much degenerates from there. We went back and forth, giving as good as we got. I would be remiss if I didn’t say that he actually got me on one point. I accused him of making a straw man attack and he called me out on logicial fallacies, to which I asked him where did I mention the term “logical fallacies?” He pointed out that a straw man attack is a logical fallacy. One point AKB, though it was his one and only shining moment in this Facebook fracas. I would say that I got the better of him in the end, to which I’m sure he’d disagree, but that’s the nature of our “it’s complicated” Facebook friendship.

Now I know what you’re probably thinking: “After all that, you only give him a 0.5 Facebook Fragility rating? You gave the guys in your last Facebook Fragile post much higher ratings.” Yes, I did, because those three guys are unbearable assholes. Here’s the thing about AKB, we might fight like cats and dogs one minute, but the very same day, we’ll be laughing and joking with each other in another post. It takes a pretty big man to be able to do that and even if he’s Ana Kasparian’s (Pretend) Brother, he’s also a man of good character. It’s just his political beliefs that suck.

This fight between pro hockey players Joel Theriault and Gaby Roch sums up our Facebook friendship quite nicely. Just be sure to watch it to the end:

After all of that, how could I give AKB anything but a 0.5 Facebook Fragile rating? Even if he is Ana Kasparian’s brother… sort of.

I disagree! Facebook without politics would rob me (and you) of this popular blog series. Speaking of which, I got into two Facebook battles this week, so I’ll be bringing you another Facebook Fragile today. You might have already seen it on my blog. If not, come back later today and it will be up. My second exchange is a bit shorter than me vs. Ana Kasparian’s brother, but I think you’ll find my other nemesis a much more slimy character. Here’s a hint: he gets a much higher Facebook Fragility rating. Now that I can tell you. Check it out!